The television industry in the country is witnessing dramatic changes that have led to the birth of newer forms of TV viewing. The growth of technology particularly the internet has left its imprints in the broadcast television industry too. This has led to considerable changes in the television viewing habits of subscribers under the different providers.

Pay TV services has suffered setbacks with the introduction of such newer forms of television broadcasting. It has led to the introduction of the cord-cutting trend among the customers who switch their existing cable TV to advanced forms of television such as satellite, fiber optic, and streaming television. These kinds of TV services rely on advanced technologies for the broadcast of contents across subscribers located in the country.

Newer forms of television such as satellite, fiber, and streaming services have numerous advantages when compared to traditional cable television. They offer an extensive array of channel packages within reasonable pricing. Moreover, these services provide numerous valuable features that are missing in conventional TV services such as DVR, On-Demand content, High-Definition, etc.

Cord cutting has increased in this year as more and more subscribers continue to ditch their existing pay TV services in favor of more advanced TV services such as streaming and fiber optic television. The following statistics will further elaborate this exponential decline of pay TV services in the country. 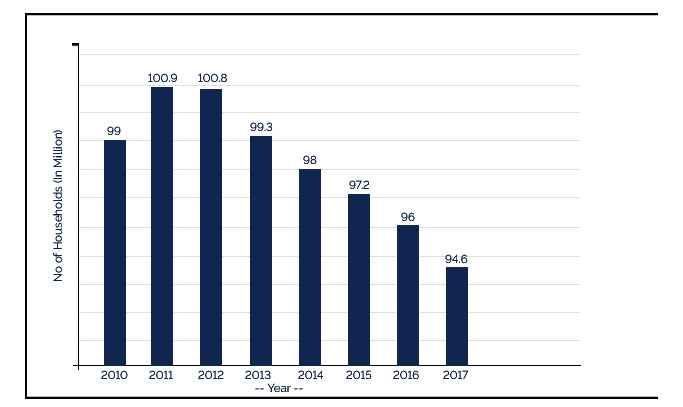 Cord cutting is being increasingly resorted by subscribers and there are various reasons behind it. Most subscribers are dissatisfied with the services that are meted out by pay TV providers. The continued reliance on older broadcasting technologies have led to declining quality of the content, which falls behind the advanced forms of television services prevalent today. Most customers view the increase in the costs of bundled packages and cable TV as unnecessary.

In addition, a majority of the TV subscribers only watches half of the channels provided in the packages. Studies indicate that viewers will only consider fewer than 10 percent of the channels offered in a most cable TV packages. Added to this is the rapid increase in the cost of cable TV in the previous year. The key factors that led subscribers to abandon their pay TV services in favor of advanced TV services can be summed up as lack of good customer service, unnecessary packages, increasing costs and lack of advanced features.

The cord-cutting trend is not happening uniformly across the country. Some of the major regions are still lagging behind the trend and relying on traditional pay TV services. Below is a general pie chart that shows the distribution of cord cutters in the country. 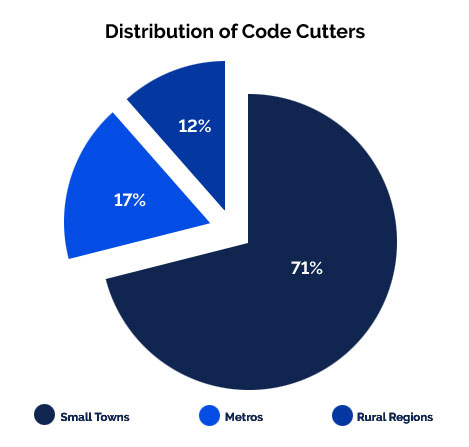 The data obtained from this pie chart offers a reality into the cord-cutting trend prevalent in the country. Indeed, it is surprising that the most of cord cutting customers are centered around in the small towns of the country. This can be attributed to the lack of proper penetration of the pay TV services in small towns. Satellite, fiber and streaming television on the other hand has increased penetration and coverage in most of the smaller towns in the country. Metros are the other key areas where a majority of the cord cutters is distributed. Some of the subscribers still use pay TV in metros.

The rapid abandoning of traditional pay TV providers by the subscribers has led to the introduction of several new cord-cutting trends. Live TV is one such trend that was a big hit in the previous year. PlayStation Vue® and DirecTV Now® have come to represent the two leading players in the Live TV market with the introduction of more advanced services such as Hulu Live, YouTube TV etc. A host of streaming television providers have also come up, the most prominent being Netflix, Amazon Fire TV, Apple TV and the upcoming Nvidia Shield.